Thank Goodness He Had Some Honey! 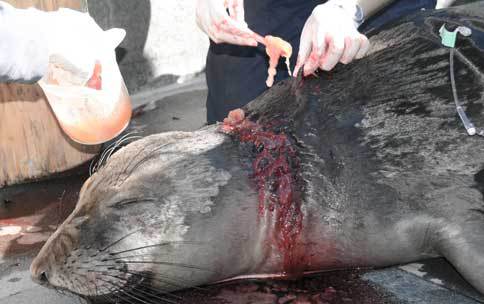 After Pilgrim’s wounds are cleaned honey is applied to speed the healing process and prevent infection.

A young elephant seal named Pilgrim is back in the wild thanks to a sweet medical treatment for a nasty bite wound - November 21, 2012

A day before Thanksgiving, Pilgrim goes back to the ocean at Point Reyes, CA. Read his story below!

Pilgrim’s nasty bite wound could easily have killed him if it wasn’t for the expert care from The Marine Mammal Center and most importantly, the kindness from donors like you! Right now there are other animals in our hospital that still need your help. Make a gift for meals and medical care and help give other patients like Pilgrim, a second chance at life!

Read more about how you can help get our patients healthy and back Home for the Holidays!

After being anesthetized, Pilgrim is examined by the Center’s veterinarians.

Weighing 216 lbs, a yearling Northern elephant seal named Pilgrim was much larger than the average elephant seal patient treated at The Marine Mammal Center. He was rescued on November 11 with a large wound on his neck, most likely as a result of a bite from another animal.

Was it a shark or another elephant seal that bit Pilgrim? We will never know. Whatever it was could easily have killed him. But Pilgrim was extraordinarily lucky. While the wound was deep, the bite did not penetrate into any areas (like the abdomen or lungs) that could have caused him more serious problems. Also in his favor was that Center volunteers rescued him from Bean Hollow State Beach in Pescadero while the wound was still reasonably fresh.

Our veterinarians went to work cleaning the wound and removing any damaged skin and tissue from around Pilgrim’s neck. After the wound was debrided, vets coated the injury with honey to help prevent infection and accelerate healing. They also prescribed a dose of antibiotics to take care of any other bacterial infection issues.

Within a few days after the debridement, Pilgrim began to look better very quickly and with just a few more wellness check ups by our veterinarians, he was ready to go back to the ocean! He was not particularly interested in eating any of the herring animal care volunteers offered him, most likely because he is an older animal. Seals Pilgrim’s age like to hang out in deep-water and forage on bottom-dwelling marine animals such as ratfish, swell sharks, spiny dogfish, eels, rockfish, and squid. Because he was a yearling and not a pup, veterinarians were not concerned that he wasn’t eating while in treatment but anxious to get him back home where he would be more likely to forage for food.

Something to be thankful for – Pilgrim is healthy and back in the wild after recovering from a nasty bite wound just 10 days earlier!

We are happy to say that after just 10 days at The Marine Mammal Center, Pilgrim was released the day before Thanksgiving at Point Reyes National Seashore. Truly something to be thankful for!